Pramilla was approached by a recruiter who had previously helped her sister obtain employment. Pramilla was taken from Nepal into Delhi’s red light district where her employer told her that she had been sold and must now work in the brothel. When she refused, Pramilla was tied to a bed for seven days and her employer brought in up to eight customers a day to rape her. On the eleventh day of her enslavement, Pramilla was able to escape. She now works with a non-profit organisation that rescues and rehabilitates victims of sexual exploitation. 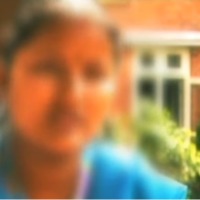 I was as good as dead. How could a living thing feel like that?

For as long as I can remember, we have been poor. My mother was always unwell. We didn’t even have proper food and clothes.

Khirmi used to say if you go to the city you will get a good salary. You will only have to wash dishes. It’s a hotel.

I was feeling happy. I was sitting by the window and looking out at the rivers and forests.

There were no trees or forests anywhere. Only houses and huge buildings. And all types of vehicles. Then Khirmi told me “It’s not Nepal Gunj, it’s Delhi. There’s more money to be made here.”

At night the girls were talking to each other. It had been a good day – their clients had paid them well. I kept wondering what was going on. I was suspicious. But nobody told me anything.

They said, “We sell beer. You will have to sell beer and drink with them.” But nobody told me that I had to have sex with them.

Vinita came to see me. Before she had been very friendly but now she looked scary. And then she openly told me what I had to do. Vinita said she had bought me for Rs. 80,000.

“Now you have to do whatever I say.”

They gave me some odd clothes. It was a very short skirt. I said, I’m not doing this, send me home. I’m not that kind of girl.

I’ve never been so scared before. I was so scared, so scared… I was terrified…

It was like being dead. It was like the life had been taken out of you.  I was as good as dead. How could a living thing feel like this?

[After 7 days of being tied to a bed and raped, she was untied. On the eleventh day, she escaped]

I looked around. I didn’t see anybody. The security guard was due to change. The morning guard had left early and the new guard was yet to arrive. That was my chance. I ran away.

You shouldn’t believe just anybody. Get to know them before trusting them. Maybe if I had not trusted I wouldn’t be here today.