Cambodia remains a source country for the exploitation of men, women and children in all forms of modern slavery including forced labour, debt bondage and forced marriage. Cambodian women eager to escape impoverished lives in rural villages are often deceived in to forced work on farms, as domestic workers or in factory jobs. Cambodian men are vulnerable due to their need to travel to secure employment. They are often subjected to forced labour on fishing vessels in Thailand, Malaysia and Indonesia and in the manufacturing sector. Moreover, the increasing demand for cheap domestic workers in private homes in the Middle East, Malaysia and Singapore, along with the possibility of tripled income has encouraged Cambodian women to travel abroad, often through informal channels for employment as maids, nannies and carers. The Government of Cambodia is making progress in combating trafficking. However this progress has been slow, and there are many challenges ahead. In 2014, the government released a five-year National Plan of Action (NPA) (2014—2018) devised by the National Committee for Counter Trafficking (NCCT).

Posvak heard about a job on the radio doing housework overseas. She was told that she would work 8 hours a day, however upon arrival she was made to work around the clock for eleven different households, being given only 2 hours rest per day. Deprived of food and abused if she did not finish the work the house was set up with CCTV and Posvak was under constant supervision. Posvak was eventually able to escape when she was lent a phone to call her mother who then informed an anti-trafficking organisation in Cambodia 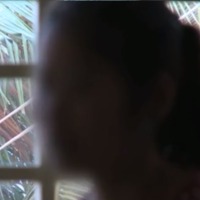 When I was young I wished to have a career that enabled my family to get by like others. But my dreams didn’t come true because I was so poor and illiterate. I didn’t have a job. I didn’t have any farm land either.

I found out about the job on the radio. I phoned the agency and I was offered a ride there. They told me that my job was just to do the housework. They said that in a day, 24 hours, I would only work 8 hours and I would be paid US $180 per month. The contract was for a period of 2 years.

The reason I believed it was legal was because I found the advertisement pretty reliable.

The contract made in Cambodia stated the working hours, but when I arrived there, no specific time was set. They asked me to work around the clock. Out of 24 hours, I had only 2 hours to take a rest.

My employer had 10 siblings and along with their parents, they lived in 11 houses. They all lived separately and I had to work for all of them. After I finished the housework, I was ordered to wash his sick father. If I didn’t finish the work, they wouldn’t give me any food, so I didn’t have energy to work. Even though I got ill, they didn’t allow me to rest.

There were big CCTV cameras installed in their house. Wherever I went and even when I was standing somewhere, they would see me. In the bathroom, they installed a camera to videotape me naked and they watched it.

When they got mad, they beat me and tore my clothes, leaving me naked. If he got angry, I had to work all day without wearing any clothes. They laughed at me when I was naked.

When I asked the employer to let me call my family, they refused, so I felt hopeless. If I didn’t work hard, he would not send me back to Cambodia, he would tear my passport and keep me there. The employer said that he bought me from the company in Cambodia.

The grandfather gave me a phone to call my mother. I asked her to inform the organization that I could not return to Cambodia because I was sold. Then my mother brought my words to the organization’s attention.

When I first realized that I was deceived, I felt very ashamed. I was afraid to talk with my friends and relatives. When the villagers knew I had experienced such hardship, they strongly criticized me and wouldn’t associate with me.

Before going to a country to work as a domestic worker, please make sure you have a contract, a passport and adequate documents. Make sure the passport and contract are witnessed by the village or commune authority before you go.