The internal migration of Chinese people seeking work has created an opportunity for human traffickers in China. Moreover the gender imbalance caused by the One Child Policy and the cultural preference for male children, has caused a shortage of women which has led to the trafficking of women to be sold as brides. As a result many women find themselves either deceived by promises of employment, sold or abducted and forced into marrying Chinese men who have paid for them. The prevalence of poverty in China makes the poor more vulnerable to enslavement. With the National Bureau of Statistics estimating that 70,170,000 are still living in poverty, people are more desperate and thus more likely to be receptive to fraudulent job offers.

Kyi Kyi was looking for employment when a recruiter offered her work as a domestic worker in Mandalay that provided a good salary she could send home to her husband. However, upon reaching Mandalay, Kyi Kyi was told she must continue on to another location or pay for transportation, meals and broker fees. Unable to pay, Kyi Kyi was forced to continue on and upon arrival in Kyae Gaung was told she had been bought and had to marry a Chinese man. When she refused she was locked in a room, beaten daily for six months and forced to labour in the family’s fields. After a while Kyi Kyi was able to learn the family’s language and gain their trust which enabled her to eventually escape by bus to the city where she was aided by locals who called the police. 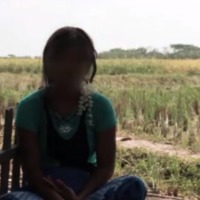 Before I was trafficked, I lived with my husband and his parents. I sold betel nut for a living. Life became harder and I could no longer sell betel nut. Then I went to see a recruiter.

I knew her as she lived on the same street as me. I had heard she did business along the border area. I asked her to help me. At that time, the situation at my home was not good. She took advantage of the situation and told me “It’s not good to stay here. Your husband’s parents are no good, so it’s better for you to go work there.” Her encouragement made me want to go there, so I did.

When I enquired about the job they reassured me that the work was in Mandalay. Therefore I went along. Working as a domestic worker could earn about 40 thousand kyats per month, but we could also earn another 40 to 50 thousand on the side. We’d be able to send 40, 50, perhaps even 80 thousand kyats home. Also, we could go back home once a month if we wanted to.

The salary was good too. If I worked for 4 to 5 months we could afford to live independently from my husband’s parents. So I went along with her.

Upon reaching Mandalay, I found out we were to continue to Muse. I said, I’m not coming because I was told we’d be only be going to Mandalay. When I said this, they told me I’d have to reimburse them a total amount of 200,000 kyats for transportation, meals and broker fees.

I didn’t have the money to pay them and I thought I could come back from Muse too, so I went along. I was still convinced I was going there for legitimate work. Only once we got to Kyae Gaung did they tell me I had to marry a Chinese man. If I didn’t marry him, I would have to pay back the money by working at a brothel in Kyae Gaung.

When I got there, a Myanmar translator arrived and told me what was happening. Only then I found out the entire story. How naïve I had been. She told me that they had bought me. If I didn’t marry him, I would be abused and would have to pay back all the money.

If I had agreed to marry him it would have been different, but since I didn’t he felt humiliated. He was not kind to me because I had cost him money. When his relatives beat me, he didn’t say a word and just watched. They said that they would abuse me until I would marry this Chinese man.

Every day for 4, 5 or 6 months, they came at night around 8pm. They came in disguise and locked me in a room. They beat me with sticks, pulled my hair and banged my head against the wall.  It usually lasted for 2 hours, then they left me, locked me up. I was in such pain I couldn’t move.

I was injured. My legs were swollen and inflamed. The joints of my hands and legs were very painful. But I wasn’t allowed to get any treatment. I was beaten like that for 6 months. The gates of the house were always locked. They never let me out.

His uncles said, “If she does not want to marry him, so be it. Let her work and then one day she may change her mind.”

The family worked in the fields at the bottom of a hill from 6am to 7pm each day. They made me work there because I had cost them money. They never considered giving me a salary of even pocket money.

I earned their trust and learned their language. After a while, they believed I would no longer run away and that I could be left unsupervised. I got permission to go back to the house early. I checked if anyone was coming with me. When I reached home, there were not Chinese relatives there.

I let myself in, quickly packed my clothes and ran away. I took a bus to the big city.

Three Chinese men approached me since I was crying and carrying many bags. They asked me how I got here and I told them my story in basic Chinese. They pitied me and gave me money, water and snacks. Then they called the police.

My parents-in-law didn’t want my husband to take me back when I returned home. But he said, “Even if a plate is used, it can be washed and reused, whatever may have happened to my wife in the past, the important thing is what she is like in my hands right now. This is my wife and I take her back.”

We reunited and decided to have a baby.

I hope that nobody will have to experience what happened to me. People should make their own decision, and think twice before going. If you believe those who use money as bait and follow them, your life will be gravely affected.