Gita was just 10 years old when she was taken by her aunt and uncle and sold to a brothel in India. Gita was rescued and now works with a charity to prevent human trafficking in to India. 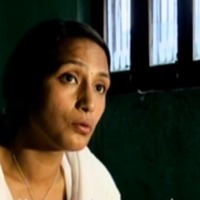 My aunt and uncle were the ones who took me… I don’t have a father. My mother was blind. I was the only child. My dad passed away when I was little.

I was 10 years old. My aunt said lets go. She told me we would be back in 3 days. So I said okay and decided to go. She took me to Pune and sold me there. I didn’t even know Hindi then, I didn’t know anything.

When I said this, they said, “You’re aunt has sold you here. She’s gone. She won’t come back now.”

It was then I realized that the place I had been sold to was a brothel.

[Gita was rescued and now works to prevent trafficking into India]