Rani was taken from her family in India and enslaved when she was seven years old. After a year, her enslaver sold her into illegal adoption. She grew up in the United States. In 1992 she married Trong Hong, a survivor of trafficking in Vietnam, where he had been a child soldier. In 2002, Rani's testimony before the Washington State legislature helped to pass the state's first anti-trafficking legislation. Rani and Trong run the the Tronie Foundation, which supports survivors of human trafficking. 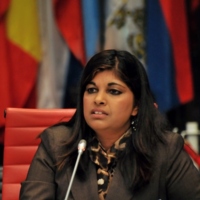 I was living in Southern India and had loving parents. I got to live my childhood. I was happy. As our financial conditions deteriorated, my father's health worsened. A respectful woman from the village approached my father and offered to ease his burden by taking care of one his children. She said she would cloth me, feed me and educate me. I went to live with her family just down the road from our house. I remember my parents visiting me and how happy they were to see that I was well taken care of. And one day when they came to visit me, I was gone!

I was sold by the lady to a man and was told that he was my master. I had no idea what was happening. I was only seven years old. I was a slave to my master! They took an innocent life like mine and treated it like garbage. When I tried to speak - they shut me down. When I tried to protest - they beat me brutally. I was starved and put through much cruelty. I literally saw cages where children were held and seasoned for submission. They broke my will and damaged my spirit. No child should pay this price because of slavery. I became lifeless and worthless. Still the people wanted to make a profit. They put me up for international adoption and that is when my life changed. I was soon adopted by a lady in the United States of America. Ironically, my deterioration became my passport to freedom.

In 1999, after 21 years, I returned to the country I hated most, India, for a short vacation. Miraculously in a tourist hotel in Southern India, I met my birth mom and that was when I learnt that my parents had no idea where I went and why I had disappeared. It is after that encounter, the missing pieces came together and I got the picture - I was trafficked at the age of seven and sold into slavery. The feeling was horrific and left me numb. That is when I decided that I need to do something to help all those innocent children and people who are trafficked into slavery.

We've got to bring hope and inspiration to people who are sold and subjugated into slavery against their will. From my own traumatic past that still haunts me, no child should be deprived of his/her freedom and dignity. Every innocent child who is sold into slavery, every child who is trafficked pays a high price and we cannot allow that. I have today become the voice of these survivors and victims. Some say I am the face of slavery - but I am also the face of hope and rescue. Under the Tronie Foundation, I am developing the survivor-led mentorship programme for women and children. We all need to come together and become their strength. We need to raise a voice together and end slavery.

Together we can prevent crimes against children sold into slavery. I ask for partners such as the UN and their audience to join me as I carry my voice around the world with millions of victims and survivors of slavery, as we all work together to carry a global Anti-Trafficking message.

Narrative as told the United Nations Office on Drugs and Crime South Asia.