In Nepal, poverty forces people to seek work overseas to provide for themselves and their desperate families. Migration across the border is unsafe and uncontrolled, which is how Kamala was trafficked and forced into slavery. It is estimated that there are over four million domestic workers in India. The domestic sector is informal and unregulated, obscured in private homes, and workers are not recognised as such but rather as ‘informal help’. Their wages are, on average, only a third of those in other sectors, they have very limited social protections, and commonly suffer poor working conditions, exploitation, abuse and slavery. Many domestic workers are migrants from poorer states and are among the most marginalised and socially discriminated populations in India. 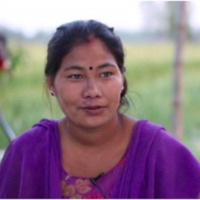 I was tricked. I was trafficked by my own aunt so you don't really know who you can trust.

They'd chew meat and spit it on my face. They would throw a plate full of rice on me. They would beat me up. They'd make me work from 5 a.m. to later than 1 a.m. the next day. And they didn't pay me. A Shakti employee helped me get on a train from Bombay to Lucknow, India, where my husband picked me up. Since then, I got involved with Shakti. I go to meetings whenever I can. The women at Shakti understand my situation. Shakti gives me loans with no interest and I use that money. I go around villages telling people to not get tricked into human trafficking. Members are given posters with illustrations to distribute. I hang them outside shops and public places.

As told to Free the Slaves