Zipora was enslaved as a domestic servant in the United States by a diplomat and his family, who beat her and failed to meet the terms of the contract originally agreed upon. When she required medical care, they refused to provide it for 2 years. It was the actions of a stranger that helped her out of her enslavement and to get a T-visa, a special visa status for victims of trafficking. In 2007 Zipora filed a suit against her captors. 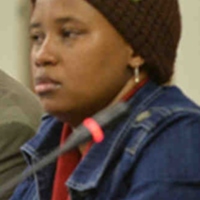 My name is Zipora Mazengo, and I am twenty-seven years old. I came to the United States from Tanzania in June 2000 to work for a diplomat and his family. The diplomat is also from Tanzania. His name is Alan Mzengi. He still serves at the Tanzanian Embassy.

I worked for the Mzengis for four years as a nanny and a housekeeper. And they never paid me.

I flew to the United States alone. When I arrived, Mr. Mzengi met me at the airport and immediately took my passport and contract away from me. He held my passport for four years, until I escaped in 2004.

I worked for the Mzengis in their large house in Gaithersburg. I had to clean the whole house, cook, do the laundry, and take care of the three children. I worked sixteen hours each day: from 6 in the morning until 10:30 each night, every day.

My contract had said that I would earn $900 each month. But the Mzengis never paid me. When I asked the Mzengis for my wages, they said they would hurt me and send me home.

My contract said that I would have two weeks vacation each year and two days off each week, but I never had a single day off. I was not permitted to leave the house.

My contract made it seem like I would have a good job. But when I made any mistakes, Mrs. Mzengi would scream at me. Once when I did not prepare her breakfast, she hit me on the face and sent me out in my summer clothes to stand outside in the snow. She told me that if I complained, ‘‘blood would fall on the floor.’’

My contract said that I would receive medical care. But when my toes became infected, the Mzengis did not take me to a doctor. My feet bled, and I could not wear shoes. But Mr. Mzengi made me go outside to shovel snow in my bare feet. Finally, two years after the infection began, Mrs. Mzengi took me to a doctor, and I had surgery in the doctor’s office.

My contract was full of lies.

A Good Samaritan helped me escape from the Mzengis’ home, and she found a lawyer for me at CASA of Maryland. My lawyer, Elizabeth Keyes, helped me to get a T-visa.

In November 2006, my lawyers arranged for me to meet with a prosecutor at the Department of Justice. He began an investigation of the Mzengis and I cooperated in the investigation. But nothing has happened to Mr. Mzengi or Mrs. Mzengi.

In April 2007, my lawyers filed a lawsuit against Mr. and Mrs. Mzengi for trafficking me to the United States and forcing me to work for four years without any wages. I still have not received any money. The Mzengis have ignored the lawsuit.

But the Mzengis are free. They have not been punished. And they have not paid. I want justice for me. But I also want to stop diplomats from exploiting other people in this way. It is wrong.

Narrative as told to the "International Trafficking in Persons" Hearing Before the Committee on Foreign Affairs, House of Representatives, October 18, 2007