Shanti narrated her story while enslaved as a bonded laborer in the rock quarries of Uttar Pradesh, India. Debt bondage is the most common form of modern slavery. Found predominantly in South Asia and South America, it occurs when a person pledges their labor or that of a child for an indefinite period of time in return for financial credit. Debts arise in India from two main sources: an urgent crisis such as illness, injury, or famine, and the need to pay for death rites or marriage celebrations. Technically, bonded laborers can end their servitude once the debt is repaid, but this rarely occurs. A combination of low wages and high interest rates makes it impossible to repay the initial debt, and the debt usually increases because the employer deducts payment for equipment and living expenses, or charges fines for faulty work. According to India’s laws, families can simply walk away from debt and bondage, but this is usually impossible: if families try to leave, the slaveholder’s thugs retaliate with beatings, rape and forced eviction. If a family survives the beatings, they are free to starve. Without access to jobs, health care, community support or credit, independence is impossible to sustain, and they re-enter debt bondage.

Though the Bonded Labor Abolition Act of 1976 criminalizes the use of the system, which is 1500 years old in India, those in debt bondage face involuntary servitude in brick kilns, rice mills, carpet looms and embroidery factories. Bonded labor is also widespread in the quarrying of granite and other stones. Workers are required to purchase their own materials, and are forced to borrow money from the contractors or quarry owners. Children aged four to 14 are required to work along with their parents for up to 14 hours a day, carrying loads of rocks in order to maximize production. Bonded children are sometimes sold to other contractors, and female workers are frequently raped. Accidents caused by explosions or drilling are common, and workers suffer from respiratory illnesses due to inhaling stone dust. 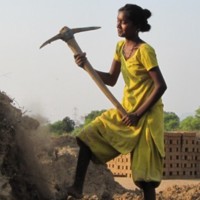 My name is Shanti. I do not know my age. I have five children. My contractor has said, “if you die I will take your dead body out of the mud and make you work to return my debt.” My husband died in September or October this year and the contractor gave me no money for his burial. The head contractor came the day before yesterday. I have a nine-year-old daughter and the contractor caught her hands, and said that he would force her to work to repay my loans. He says I owe 8000 rupees [$180]. My husband took the loan, and now that he has died the contractor is forcing me and my daughter to pay it back.

I tried my best to work somewhere else but if he does not let me go, what am I to do? He forces me to work for him. I break stones. The problem is that those big stones need to be brought out of the mountains. Some stronger person needs to do that job, my husband was doing it but now that there is no one to bring those stones. So whatever small pieces are lying there I break those. I break enough to earn 400 rupees [$9] and it takes me ten or 12 days to achieve that. I don’t even have a place to stay. I stay on someone else’s land. And when they tell me I have to move my little hut, I have to move it.