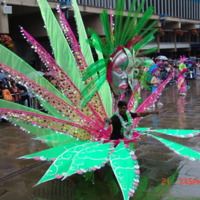 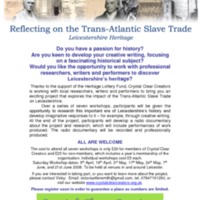 Reflecting on the Trans-Atlantic Slave Trade

Crystal Clear Creators is a not-for-profit arts organisation based in the East Midlands. Reflecting on the Trans-Atlantic Slave Trade enabled a series of community creative writing workshops in Leicester exploring themes of the slave trade. The workshops involved talks from experts in the field, a tour of relevant places of interest, and research at the Leicester, Leicestershire and Rutland Records Office. Those involved then wrote, produced, recorded and broadcast radio dramas on the subject, and held a day of performances for the public. The project was developed with Leicester's Arts forum LACAF and Mainstream Partnership. A follow-on project in 2009-10, Reflections: The Trans-Atlantic Slave-Trade, was a course for young people about the transatlantic slave trade, which included researching and writing about the subject. The project culminated in a day of performances and an exhibition at New Walk Museum. 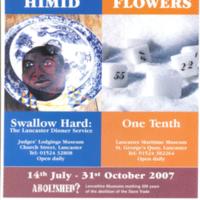 Abolished? Lancashire Museums marking 200 years of the abolition of the Slave Trade

Lancaster was the UK's fourth largest slaving port at the height of the transatlantic slave trade in the 18th century. Lancashire Museums worked with a range of partners to raise awareness of this largely hidden history - first from 2002 through STAMP (the Slave Trade Arts Memorial Project), and in 2007 through Abolished? This bicentenary project consisted of exhibitions, creative writing, radio broadcasts, and schools projects, one of which produced a Slavery Town Trail that explored some of the buildings made possible by the wealth the slave trade brought to Lancaster. At the heart of the project were commissioned installations and interventions by artists Lubaina Himid ('Swallow Hard: The Lancaster Dinner Service' at the Judge's Lodgings) and Sue Flowers ('One Tenth' at Lancaster Maritime Museum). Both were accompanied by outreach programmes and workshops with local schools. A touring exhibition was produced in partnership with Anti-Slavery International and Lancashire County Council Youth and Community, which looked at transatlantic slavery and modern day slavery. The exhibition toured throughout Lancashire. 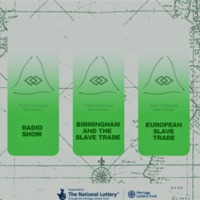 Three Continents, One History: Birmingham, the Trans-Atlantic Slave Trade and the Caribbean

'Three Continents, One History' was a community project led by the African-Caribbean Millennium Centre (ACMC) to explore the historical links between Birmingham, the transatlantic slave trade and the Caribbean. Research focused on themes such as the region's manufacturing history and its links to slavery, the role of local regiments in keeping order on Caribbean plantations, the African presence in the West Midlands, and the region’s role in the abolitionist movement. The project aimed to examine the contemporary relevance of 1807 and the slave trade to Birmingham’s diverse communities, to contribute to a reshaping of the National Curriculum, to establish a physical archive and an interactive website. The research was shared with the public via weekly broadcasts on New Style Radio (a community radio station housed in ACMC) and simulcasts with Caribbean and African radio stations. Other events included conferences, dramatisations and discussion workshops.