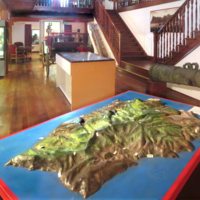 The Museum of Saint Helena originated as a small natural history collection in 1854. Over the last 150 years it has moved three times before being officially opened in its current site in 2002 to mark the 500th anniversary of the island's discovery. It is housed in an eighteenth-century former power station in the island's capital, Jamestown. The museum explores the history of St Helena and it's position in the world. It has a large collection of physical artefacts supplemented by a digital archive of images, videos and audio.

The permanent exhibition offers a chronological view of Saint Helena's history, beginning with its geological development. The displays then explore the discovery of the island by European's, the role of the East India Company and migration. There is also a display about Napoleon Bonaparte's exile to Saint Helena.

Within the displays about colonisation and the East India Company are mentions of enslaved Africans brought to the island. Abolition and emancipation are also examined, as the interpretation moves on to explore the diverse make up of Saint Helena's population into the twentieth century. These displays are supported with artefacts and finds from recent archaeological digs on the island.