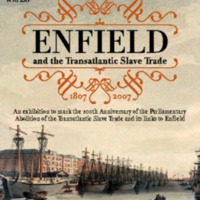 Enfield and the Transatlantic Slave Trade

An exhibition to mark the bicentenary was developed by Enfield Museum Service in partnership with the British Museum and Enfield Racial Equality Council. The exhibition looked at West African culture, the development of the local African community, the links between the transatlantic slave trade and Enfield, wealthy landowners and Quaker abolitionists who lived in the area. Free family days held during school vacations offered traditional Ghanaian story-telling, dancing and drumming, crafts and object handling. Living History Days gave visitors the opportunity to meet actors portraying William Wilberforce and Olaudah Equiano. School workshops included a drama session and performance about a runaway slave developed from material from Lambeth Archive. The museum service also produced a book, edited by Valerie Munday, which explored further the links between Enfield and the slave trade. The book was sent to all schools in the borough, and formed the basis of a teaching resource aimed at Key Stages 2 and 3. Loan boxes and handling collections provided by the museum service include Ghanaian artefacts and items relating to the slave trade. In 2011, Enfield Racial Equality Council unveiled a plaque to commemorate abolition at the Enfield Civic Centre. 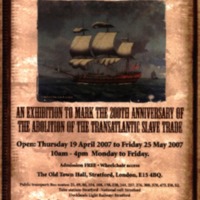 The Wickedest of Cargoes

London Borough of Newham Council led “The Wickedest of Cargoes…”, an exhibition at Stratford Town Hall, which used local museum and archive collections to explore the history of the slave trade and abolition. It looked at the history of slavery through different societies and cultures, and especially the Barbary pirates who enslaved seamen and passengers from ships on the west coast of North Africa. The exhibition explored the transatlantic slave trade and its abolition from a local perspective, focusing on the large Quaker community in West Ham and, in particular, John Fothergill and Samuel Gurney. Newham has many residents from an African Caribbean background, who were consulted in the development of the exhibition. Addressing the legacies of slavery, the exhibition looked at the rising Black population of the borough through history and the importance of the Coloured Men’s Institute in Canning Town, set up as a place where Black families could meet.