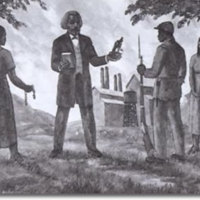 Education of the Colored Man

In 1938, Aaron Douglas returned to Fisk University as an assistant professor of Art Education, and it was during his summer there that he, under the aegis of the Treasury Department’s Treasury Relief Arts Projects, created the mural Education of the Colored Man, for the Atlantic City Holmes Village Housing Project in New Jersey.  The mural depicts a young Frederick Douglass standing before a small crowd—a civil war solider, a former slave, a sharecropper and a seamstress—who listen to his words. Behind them is a growing metropolis, representing the industrial expansion of the urban north. The art project was funded by the Treasury Relief Arts Project (TRAP) and the Works Progress Administration (WPA).