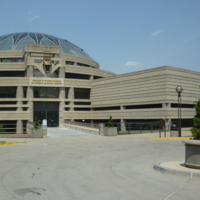 The museum was established by Dr. Charles Wright, an obstetrician and gynaecologist who envisioned an institution to preserve Black history after visiting a memorial to Danish World War II heroes in Denmark. It opened in 1965 as Detroit’s first international Afro-American museum. After expansions in 1978 and 1992, the museum was finally named the Charles H. Wright museum after its founder in 1998. It has since received monetary support from individuals, foundations, corporations, and government sources. The mission statement of the museum is to open minds and change lives through the exploration and celebration of African American history and culture.

Current exhibitions on display in the museum include a large 22,000 square-foot exhibition that examines Ancient and Early Modern African history and the experiences of the enslaved during the Middle Passage, alongside the experiences of those who resisted the horrors of bondage and self-emancipation. Throughout this exhibition, entitled ‘And Still We Rise: Our Journey Through African American History and Culture,’ there is a clear emphasis on the efforts of the everyday African American people who built families, businesses, educational institutions, and civic organisations in Detroit, past and present. The museum also offers exhibitions that look at the contributions of African Americans in science and technology, as well as showcasing examples of stained glass art by Samuel A. Hodge.

The museum has a busy events programme that includes community health and fitness programs, as well as lectures and education sessions for both children and adults. There are group tours for all ages, as well as led workshops for pre-school children. All of these workshops aim to highlight the lessons portrayed in the ‘And We Rise’ exhibition, prompting reflection and discussion from visitors.