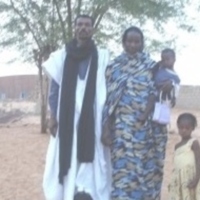 Selek’ha Mint Ahmed Lebeid was born into slavery in Mauritania. She escaped in 2000 at the age of 20 after she reached a turning-point and realized she was a slave: “I felt my situation was wrong. I saw how others lived.” One day she started walking and didn’t stop until she was free. Then, with the human rights organization SOS Slaves, Selek’ha returned to seek the release of her mother, Oumoulkhér.  Virtually all extended families of the dominant White Moor caste in Mauritania have owned slaves for generations: slaves are the property of a male family member and children of slave women become property too. Slave families usually live within their master’s household, are not paid for their work, and generally have no freedom of movement. They work as herders of livestock, agricultural workers, and domestic servants. As in the 19th-century American South, race matters intensely: most slaveholders are Arab Berbers and most slaves are descendents of black Africans. Estimates of the number of black Africans enslaved in Mauritania range from 100,000 to one million, a vast proportion of the country’s three million population.