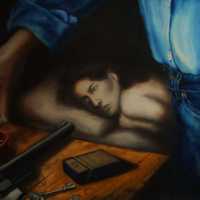 The UK National Crime Agency estimates 3,309 potential victims of human trafficking came into contact with the State or an NGO in 2014. The latest government statistics derived from the UK National Referral Mechanism in 2014 reveal 2,340 potential victims of trafficking from 96 countries of origin, of whom 61 percent were female and 29 percent were children. Of those identified through the NRM, the majority were adults classified as victims of sexual exploitation followed by adults exploited in the domestic service sector and other types of labour exploitation. While a number of victims are trafficked from other countries such as Albania, Romania and Nigeria into the UK, UK residents are also vulnerable to commercial sexual exploitation.  Suzzan Blac was born in 1960 in Birmingham to a dysfunctional family in which she experienced physical, emotional and sexual abuse. In 1976 she travelled to London for what she thought was a job interview, after meeting with her employer and having her mother sign a contract and consent form Suzzan thought she would begin a new life in London. However, she was taken to an old hotel building, raped by her employer and multiple other men before being forced, along with other young girls, to perform sexually in front of both a video and still camera. Subjected daily to threats, beatings and rape, Suzzan learned how to numb her mind. At the age of 16 Suzzan was able to escape from her traffickers with the help of one of the men involved in the trafficking ring. However, while she may have been physically free, she felt her mind was still trapped. At the age of 18 filled with guilt, shame and self-blame she sought medical help but was not given the support she needed by doctors who either gave her drugs to numb her feelings or abused her further. It wasn’t until the birth of her daughter at the age of 28 that Suzzan says she began to recognise her past abuse and the understanding of true motherhood. During the years 2000-2004 she was compelled to paint 42 images about her abuse in order to help process her pain and trauma into something tangible. Suzzan did not reveal these paintings for a further 10 years, finally deciding in 2011 that being a survivor was not enough, she wanted to be a voice for other survivors. Suzzan’s work is now exhibited around the world and she continues to be a voice for survivors, using her blog on The Violence of Pornography and her art in seminars to train social workers on child sexual abuse and trafficking.