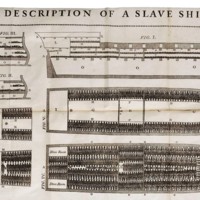 The Print that Turned the World?

The Print that Turned the World? was an exhibition at the London Print Studio, which examined the role played by printmaking in changing public attitudes towards the slave trade and influencing the abolition campaign. The exhibition looked in particular at the influence of the widely publicised print of the slave ship 'Brookes', first published in 1788; the crowded and inhumane conditions depicted had a significant impact on public opinion. The exhibition also examined the role of William Wilberforce in the abolitionist campaign, and the continuation of anti-slavery efforts in modern times. London Print Studio worked with local schoolchildren in creating the exhibition and associated artworks.