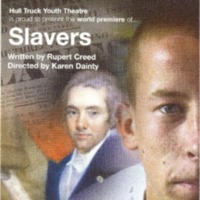 Hull Truck Theatre supported Wilberforce 2007 with two specially commissioned productions, Slavers and Sold, and a playwright festival. For one week in August 2007, Hull Truck Youth Theatre presented Slavers, set in 2007, which told the story of abolition through the eyes of young people in Hull. Written by Rupert Creed and directed by Karen Dainty, the play followed a group of school leavers and their potentially prosperous business-start up, trading in human cargo. When some started questioning the morality behind the business, the audience was transported back to the debates of Wilberforce and his allies two hundred years previously. Another play, ‘Sold’, in conjunction with Liverpool Hope University, sought to raise awareness about the victims of human trafficking and sexual exploitation today.