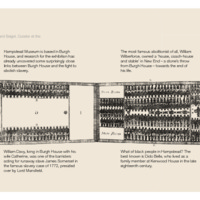 An exhibition at Hampstead Museum (based in Burgh House) which examined the connections between Hampstead and slavery. It looked at how fortunes made in the West Indies funded the purchase of properties in this prosperous area, through men like William Beckford and Robert Milligan. Hampstead was also home to men and women tied to the abolitionist movement, such as Samuel Hoare. William Davy, living in Burgh House, was one of the barristers who acted for runaway slave James Somerset in the case of 1772, presided over by Lord Mansfield.