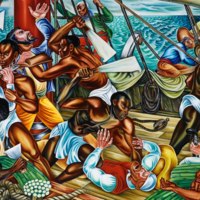 In 1938 the Talladega College President Buell Gallagher commissioned the muralist Hale Woodruff to paint a series of six murals about the transition from slavery to freedom. These murals were to be displayed in the Savery Library. Installed in 1939, on the centennial of the Amistad slave ship uprising, the first three mural panels depicted scenes of the mutiny: The Mutiny Aboard the Amistad (depicting the 53 Africans kidnapped from Sierra Leone to be sold into Spanish slave trade, and the uprising of Senbeh Pieh, also known as Cinque); The Trial of the Amistad Captives (depicting the first civil rights case in America) and The Repatriation of the Free Captives (depicting the repatriated slaves on the shores of Africa). The remaining three panels of the series are titled The Underground Railroad; Opening Day at Talladega College, and The Building of Savery Library. During an interview with Al Murray in 1968, Woodruff remembered: “Out of this mutiny people like Josiah Willard Gibbs, the Baldwins, Tappan and so forth, formed what was called the American Missionary Association (AMA). That was about 1840. It was out of the efforts of this organization that many of the Negro schools in the South were founded – LeMonye, Talladega, and so forth. So this mural was a gesture of appreciation on the part of Talladega for the AMA. The mural was also painted in honor of the slaves and their mutiny and their final freedom.”