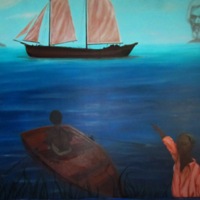 In 2012, Mexican muralist Luis Zarate created the mural Underground Railroad on Bay Street in Sodus Point, Wayne County in upstate New York. Sponsored by the Neighborhood Association of Sodus Point, the mural depicts the involvement of Sodus Point in the Underground Railroad of the 1850s. Captain George Garlock, who captained the ship Free Trader out of Sodus Point and picked up runaway slaves on his way to Canada, is depicted in the centre of the mural on the boat between the black antislavery leaders Harriet Tubman and Frederick Douglass. On July 14, 2012, a dedication ceremony revealed a plaque was mounted below the mural that reads: “This mural depicts a scene of the Underground Railroad. From stories passed down there were several safe houses in this area that were used to harbor 'Freedom Seekers.' These included the old Cohn Farm and the old Sodus Fruit Farm and what is now Maxwell Creek B & B and Silver Waters B & B. Sometimes a schooner, out of the old Sodus Point ore dock, would pick up slaves on its way to Canada."