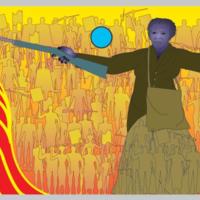 The Dreams of Harriet Tubman

In 2000, muralist Mike Alewitz planned on creating a series of murals about the heroes of the abolitionist movement, titled The Dreams of Harriet Tubman. Alewitz’s goal was to have the Dreams series as a necklace of murals across the state of Maryland with the flagship mural on a major wall in the city of Baltimore. This mural would depict Harriet Tubman, who was also known as Moses. In a pre-circulated plan on Black Radical Congress General News, Alewitz described how the flagship mural would have an army of freedom fighters (Martin Luther King Jr., Malcolm X, Mumia Abu Jamal, Sojourner Truth and Robert Gould) standing behind a musket-wielding Tubman. But the mural stirred up controversy when the group who had planned to display the mural, the Associated Black Charities Inc., decided the piece could be construed as racist and violent. Alewitz was asked to replace the musket but he refused: “I will not disarm Harriet Tubman. I won’t take [the musket] out of her hands.” The lack of a major wall was a setback for the Dreams series and another of the murals, on a wall in Hartford County, was defaced in the summer of 2000 by racist graffiti.